If the Orthodox Jewish community is in the grips of fear, it’s a very wimpy bunch.  Much more serious crimes and at a much higher rate go on in many parts of the city all the time. The residents of those beleaguered neighborhoods will get fed up at this special treatment; they are being ignored and this will spark a backlash. And as you might have noticed, the media, politicians and special interests are back to reporting swastika sightings. — Henry Finkelstein 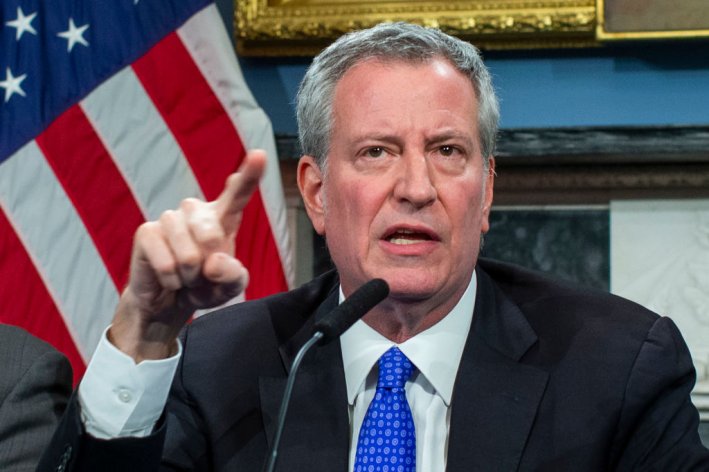 New York Mayor Bill de Blasio speaks to the media during a press conference at City Hall on January 3, 2020 in New York City. The NYPD will take actions to protect the city and residents against any possible retaliation after the deadly US airstrike in Iraq, Mayor Bill de Blasio said during a press conference.
Eduardo Munoz Alvarez––Getty Images
BY ASSOCIATED PRESS
JANUARY 10, 2020

Fear has gripped the city’s Orthodox Jewish community since the the fatal Dec. 10 attack at a kosher grocery store across the Hudson River in Jersey City and the Dec. 29 stabbings at a Hanukkah celebration in suburban Monsey.

The new cameras will be installed in the Brooklyn neighborhoods of Williamsburg, Crown Heights and Borough Park, where Hasidic Jewish residents have reported attacks ranging from someone pulling off a wig or hat to more violent assaults.

“An attack on the Jewish community is an attack on all New Yorkers,” de Blasio, a Democrat, said in a statement. “These new security cameras will increase the NYPD’s visibility into these neighborhoods, and help our officers on the ground keep New Yorkers safe.”

The announcement about the new security cameras comes a week after city officials announced they would implement “hate crime awareness programming” at middle and high schools in the same three Brooklyn neighborhoods that are getting the cameras.

Police Commissioner Dermot Shea said the cameras “will support our increased patrols and the targeted deployment of counterterrorism officers at key locations to ensure that everyone is safe.”