Here’s an example of “objective” journalism

What, Exactly, Is Tulsi Gabbard Up To?

As she injects chaos into the 2020 Democratic primary by accusing her own party of “rigging” the election, an array of alt-right internet stars, white nationalists and Russians have praised her. 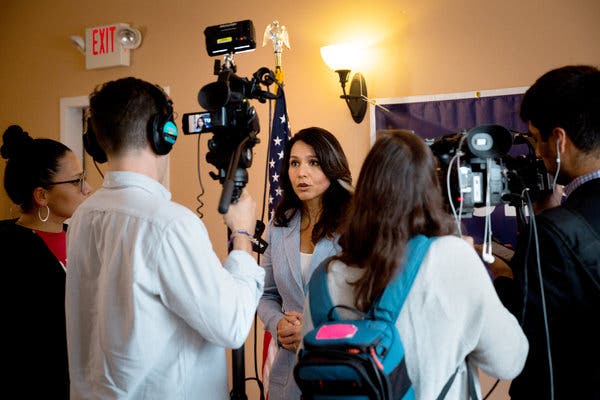 Representative Tulsi Gabbard, who campaigned in Berlin, N.H., on Friday, threatened to boycott Tuesday’s debate, arguing that the Democratic National Committee and corporate media are “trying to hijack the entire election process.”CreditCreditElizabeth Frantz for The New York Times

“She’s got a good energy, a good vibe. You feel like this is just a serious person,” Mr. Cernovich said. “She seems very Trumpian.”

Among her fellow Democrats, Representative Tulsi Gabbard has struggled to make headway as a presidential candidate, barely cracking the 2 percent mark in the polls needed to qualify for Tuesday night’s debate. She is now injecting a bit of chaos into her own party’s primary race, threatening to boycott that debate to protest what she sees as a “rigging” of the 2020 election. That’s left some Democrats wondering what, exactly, she is up to in the race, while others worry about supportive signs from online bot activity and the Russian news media.

Perhaps strangest of all is the unusual array of Americans who cannot seem to get enough of her.

On podcasts and online videos, in interviews and Twitter feeds, alt-right internet stars, white nationalists, libertarian activists and some of the biggest boosters of Mr. Trump heap praise on Ms. Gabbard. They like the Hawaiian congresswoman’s isolationist foreign policy views. They like her support for drug decriminalization. They like what she sees as censorship by big technology platforms.

A spotlight on the people reshaping our politics. A conversation with voters across the country. And a guiding hand through the endless news cycle, telling you what you really need to know.

Then there is 4chan, the notoriously toxic online message board, where some right-wing trolls and anti-Semites fawn over Ms. Gabbard, calling her “Mommy” and praising her willingness to criticize Israel. In April, the Daily Stormer, a neo-Nazi website, took credit for Ms. Gabbard’s qualification for the first two Democratic primary debates.

Brian Levin, the head of the Center for the Study of Hate and Extremism at California State University-San Bernardino, said Ms. Gabbard had “the seal of approval” within white nationalist circles. “If people have that isolationist worldview, there is one candidate that could best express them on each side: Gabbard on the Democratic side and Trump on the Republican side,” Mr. Levin said.

Ms. Gabbard has disavowed some of her most hateful supporters, castigating the news media for giving “any oxygen at all” to the endorsement she won from the white nationalist leader David Duke. But her frequent appearances on Tucker Carlson’s Fox News show have buoyed her support in right-wing circles.

Both Ms. Gabbard and her campaign refused requests for comment about her support in right-wing circles or threat to boycott the debate. Even some political strategists who have worked with her are at a loss to explain her approach to politics.

“She’s a very talented person but I’m not sure, I just don’t know what to say about the campaign exactly,” said Mark Longabaugh, a Democratic strategist who worked with Ms. Gabbard when she was campaigning for Senator Bernie Sanders of Vermont in 2016.

Yet there is only confusion for several Democratic officials, activists and party officials, who privately say they have been a little spooked by Ms. Gabbard. Rival campaigns worry about her unpredictable attacks if she participates in the debate, pointing to her sharp jabs against Senator Kamala Harris of California in an earlier matchup.

“She’s taken a series of policy steps which signal to the right that she has deep areas of alignment,” said Neera Tanden, a longtime policy adviser to Hillary Clinton who now leads the Center for American Progress, a liberal think tank.

The questions deepened on Thursday after Ms. Gabbard threatened to boycott Tuesday’s debate, arguing that the corporate news media and the Democratic National Committee are working together to rig the event. (The New York Times is a co-sponsor of the debate with CNN.)

That message resonates with many of Ms. Gabbard’s supporters. In a moment marked by fractured politics, Ms. Gabbard’s nontraditional positions are a major part of her appeal for voters seeking to break out of polarized partisan divisions. Joe Rogan, the popular podcast host, said he planned to vote for her. Jack Dorsey, the chief executive of Twitter, donated to her campaign.

But it’s also an argument that reminds some Democrats of the narrative pushed by Russian actors during the 2016 presidential contest, when an operation by internet trolls worked to manipulate American public opinion: that the electoral system is broken and cannot be trusted.

Some of those who have worked with Ms. Gabbard say that, as an Iraq war veteran whose chief message is that America should stop trying to police the world, she is representing viewpoints that draw support from an array of people in the United States as well as abroad.

“In reality, Tulsi is really running on an antiwar message that’s consistent with where a lot of veterans are,” said Jon Soltz, chairman of the liberal veterans organization VoteVets.org, which worked closely with Ms. Gabbard during her first congressional campaign. “I know everyone thinks there’s a conspiracy theory here but that’s really what she’s doing.”

Still, Democrats are on high alert about foreign interference in the next election and the D.N.C. is well aware of the frequent mentions of Ms. Gabbard in the Russian state news media.

An independent analysis of the Russian news media found that RT, the Kremlin-backed news agency, mentioned Ms. Gabbard frequently for a candidate polling in single digits, according to data collected by the Alliance for Securing Democracy, a group that seeks to track and expose efforts by authoritarian regimes to undermine democratic elections.

Disinformation experts have also pointed to instances of suspicious activity surrounding Ms. Gabbard’s campaign — in particular, a Twitter hashtag, #KamalaHarrisDestroyed, that trended among Ms. Gabbard’s supporters after the first Democratic debate, and appeared to be amplified by a coordinated network of bot-like accounts — but there is no evidence of coordination between these networks and the campaign itself.

Laura Rosenberger, a former policy aide to Mrs. Clinton’s campaign and director of the Alliance, sees Ms. Gabbard as a potentially useful vector for Russian efforts to sow division within the Democratic Party.

“The Russian activity could be part of a longer-term effort to drive a wedge among Democrats,” she said. “This messaging has echoes of 2016.”

That kind of speculation inflames Ms. Gabbard’s supporters online, who are known for swarming Ms. Gabbard’s critics on Twitter, for attacking the news media and the Democratic establishment for perceived bias against her and for compiling YouTube clips of her “destroying” and “shutting down” her Democratic rivals.

Ms. Gabbard’s fans are especially sensitive to claims that she is supported by Russian bots and amplified by the Russian state-funded news media outlets — a conspiracy theory, they say, that is designed to delegitimize her campaign and her foreign policy views.

“This whole thing the Democratic Party has done by putting forward this false idea that there was collusion between Russia and Trump has hurt our relations in a huge way with the Russians,” Mr. Graham said. “I can’t speak for Tulsi, but I think she feels kind of the same way on some of these things.”

While Democrats in Washington fret about Ms. Gabbard, her primary rivals have largely stayed silent, seeing little advantage in attacking a low-polling candidate.

She is likely to get harsher treatment back in Hawaii, where a cottage industry of researchers, former opponents and Democratic strategists has sprung up to track her connections and background and ties to the teachings of the guru Chris Butler, who founded The Science of Identity Foundation, and whose work she said still guides her. Ms. Gabbard has said the focus on her relationship with Mr. Butler and her faith was fueled by anti-Hindu bigotry.

She already faces a serious primary challenge for her House seat from State Senator Kai Kahele, a Democrat. Though his campaign is focused on economic issues, he sees Ms. Gabbard’s support from extremists as a potential liability.

“Clearly there’s something about her and her policies that attracts and appeals to these type of people who are white nationalists, anti-Semites and Holocaust deniers,” Mr. Kahele said. “To her credit she has denounced David Duke, rejected these endorsements. But it does beg the question why.”

Ms. Gabbard, once a Democratic darling as a telegenic newcomer and the first Hindu member of Congress, began falling out of party favor during the Obama administration, when she picked a series of fights over foreign policy, joining Republicans in demanding that President Barack Obama use the term “radical Islam.”

In 2016, she resigned her position as vice chair of the D.N.C. to endorse Mr. Sanders over Mrs. Clinton.

While Ms. Gabbard has opposed recent military interventions in the Middle East, she has developed relationships with leaders known for their authoritarian tendencies. She touts her support for Prime Minister Narendra Modi of India, who has empowered Hindu fundamentalists at great cost to India’s minorities. Ms. Gabbard also met with Egypt’s strongman leader, Abdel Fattah el-Sisi, during a 2015 trip to Paris with Dana Rohrabacher, a former Republican congressman known for his ties to Russians.

Most controversially, she has repeatedly defended the brutal Syrian dictator, Bashar al-Assad, whom she met in January 2017.

Those positions confound even some of her former Republican supporters.

Rabbi Shmuley Boteach, a pro-Israel activist who founded the World Values Network, said he first met Ms. Gabbard through Senator Cory Booker of New Jersey, who brought the congresswoman to dinner at a kosher restaurant in Washington.

His group, which is funded by the Republican megadonors Sheldon and Miriam Adelson, awarded Ms. Gabbard their “Champion of Freedom Award” at their annual gala in 2016. A picture from the event shows a grinning Ms. Gabbard posing with Rabbi Boteach and Ms. Adelson.

In the three years since, Ms. Gabbard has criticized Israel for its reaction to protests, met with Mr. Assad and made several statements defending his regime.

“To have a moral woman like Tulsi who is a military hero suddenly sit with a man who did that was inexplicable,” Rabbi Boteach said. “I don’t understand it until today. I can’t figure her out.”