Poland still has a problem with anti-Semitism, but deserves credit both for the fact that Jews live safely there, and for being a strong ally of Israel 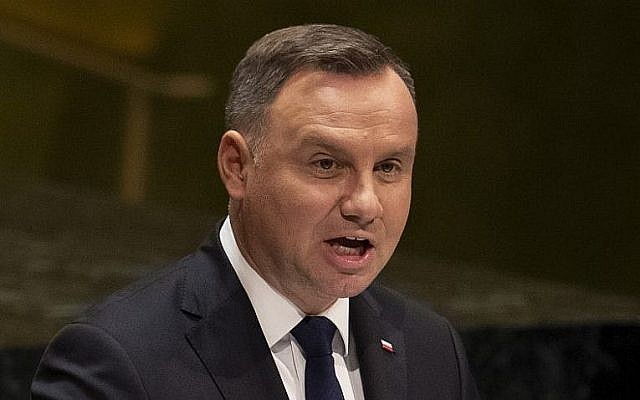 As I write this column the media is blowing up with reports that the president of Poland, Andrzej Duda, met with prominent American Jewish leaders this past Wednesday and said that Jews are responsible for anti-Semitic attacks in Poland. In particular, the media is reporting that the president blamed the remarks of Israeli Foreign Minister Israel Katz that “the Poles suckle anti-Semitism with their mother’s milk” for anti-Semitic incidents.

For the past few years, during the week of the United Nations General Assembly, the Polish president has invited Jewish leaders for a dialogue. His gesture at dialogue deserves better than this incomplete report. I attended the meeting which was amicable and respectful.

It opened with the president offering brief introductory remarks.

When he finished and opened it to questions, I jumped in to thank him for all the Polish government has done to honor the memory of the three million Polish Jews — half of the Holocaust victims — who were murdered in the German extermination camps. Two years ago, I traveled throughout Europe to many of the horrible sites related to the Holocaust, everywhere from Hitler’s birthplace to the bunker where he committed suicide, the camps and the memorials, all of which I write about in my forthcoming book, “Holocaust Holiday: One Family’s Descent into Genocide Memory Hell.” It was especially striking how much more effort the Poles have made to preserve the sites of the atrocities and memorialize the victims, especially the Jews. The Polish government is rarely given its due for its commitment.

Given this sensitivity, I took the opportunity to ask the president if he would intercede on the behalf of the Jewish people and Israel to speak out against the plan of the European Union to prevent the labeling of products made by Israelis in the disputed territories of Judea and Samaria in Israel. It is an outrageous capitulation to the anti-Semitic Boycott, Divestment and Sanctions movement. It discriminates against the Jewish people and sides with the Palestinians in the dispute with the Israelis, which strengthens their intransigence.

I pointed out the hypocrisy of the EU’s policy. No special labels are required of companies that produce products in Turkish-occupied Cyprus. China is not prevented from putting its name on products it manufactures in occupied Tibet. Russian products from Crimea are not given special labels.

The president listened respectfully, but said that his government was bound by the upcoming ECJ, European Court of Justice, decision. But I argued that Poland did not have to abide by it. My understanding is that individual members of the EU can decide whether to comply. I mentioned that Poland has shown Israel considerable backing at the European Union and is an important ally. Poland should continue to have Israel’s back. So many other European countries have been quick to turn on Israel, but Poland has not.

Gratifyingly, the president said he was going to speak to the prime minister when he returns home to see what could be done.

A few more questions from Jewish leaders followed and then President Duda raised an issue that was on his mind. Several months ago, on his first day on the job, Israel’s Foreign Minister Yisrael Katz said in an interview, “We will neither forgive nor forget, and there were many Poles who collaborated with the Nazis. How did Yitzhak Shamir put it — they killed his father — ‘the Poles suckle anti-Semitism with their mother’s milk.’”

Polish Prime Minister Mateusz Morawiecki was very upset and canceled plans to attend a meeting of the leaders of central European EU members in Israel.

The president told our group the Polish people were incredibly offended by Katz’s remark. He said many Poles had told him he should not visit Israel until Katz apologizes. Duda seemed disappointed not only that Katz has not apologized but also that not enough people have spoken out against his remarks.

I jumped in again and pointed out that many people in the room had spoken out against Katz’s comments. I said at the time that his remarks were unacceptable and unfortunate. I told President Duda that the foreign minister’s statement in which he collectively blamed all Poles as being anti-Semitic was, obviously, not just factually wrong but an affront to Jewish values. Judaism judges each person by their individual actions. We always reject collective guilt.

Going back to last February, I told the Jerusalem Post at the time that Katz’s comments were particularly misguided coming at a time when the Polish government had made the incredibly courageous decision to host a conference in Warsaw – which I attended – holding Iran accountable for their aggression against Israel. The conference, which was attended by Vice President Pence, Prime Minister Netanyahu, Secretary of State Mike Pompeo, Jared Kushner, Jason Greenblatt, and the foreign ministers of many Arab states was unprecedented. Why would Katz have chosen to attack Poland – especially with words that deeply contravene Jewish values – at that precise moment? It was mind-boggling. I was quoted in the Jerusalem Post as saying that Prime Minister Morawiecki had just “showed great moral courage in convening an international conference with the United States to counter Iranian aggression and genocidal threats to Israel and the Jewish people.”

The conversation continued with the other Jewish leaders and then Edward Mosberg stood up to speak. Mosberg is a well-known Holocaust survivor and someone who commands respect as an eloquent witness to the decimation of our people. A man in his 90s, a successful real estate developer in New Jersey, and a survivor of multiple camps and philanthropist, he speaks every year at March of the Living and his fire-and-brimstone speeches rattle the crowd with the depth of the horrors of what the holocaust represents and what he experienced.

He was born in Poland and is close to the Polish government. He was wearing the Order of Merit medal they had given him. He started to speak and mentioned that Katz’s comments had created anti-Semitism in Poland.

The more he said and the insinuation that Jews are responsible for any Polish anti-Semitism, the more uncomfortable I began to feel.

Mosberg repeated that the anti-Semitism in Poland was instigated by the Jews.

At that point, the meeting began to break up. An hour had elapsed. The president needed to leave and the discussion was moving in an unfortunate direction.

The Polish president is correct that Yisrael Katz should apologize and build bridges with Poland. There is a big difference between what Shamir said 30 years ago, knowing his father was killed by Poles, and Katz repeating the remark. This was before Poland became such a strong advocate for Israel in the EU and before Poland held that incredible conference in Warsaw mobilizing opposition against Iran. Shamir spoke at a time when the camps said “people” died rather than Jews.

Poland has changed dramatically. Jewish life is beginning to grow under the leadership of inspired visionaries like Chief Rabbi Michael Schudrich and committed pro-Israel activists like Jonny Daniels. The country still has a problem with anti-Semitism (as does all of Europe) and has a long way to go to acknowledge Polish collaborators in the Holocaust. But they deserve great credit for preserving the memory of millions of Jewish martyrs in the camps, as a country in which Jews live safely and in growing number, and as a strong ally of Israel. There are real friendships developing between Jews and Poles, Israelis and Poles and the two governments.

At the 80th anniversary of the start of the Second World War, it’s for Poles and Jews to work together to commemorate the atrocities inflicted by the German Nazis, remember the six million, and jointly fight governments like Iran who plan a second holocaust.

It’s time for Poles and Jews to be allies and friends.