We Must Speak Up Against Israel’s Slaughter in Gaza

We Must Speak Up Against Israel’s Slaughter in Gaza

Palestinians living in Gaza are subjected to prison-like conditions and are now being murdered in their dozens.

For over a decade, the Gaza Strip has been subjected to a brutal, medieval-style siege. Imposed by Israel after the election of the Hamas government in 2006, the stated objective of the siege was “economic warfare“: to block all economic activity in Gaza and thereby turn the civilian population against its leadership.

To this end, imports were restricted to what Israeli bureaucrats deemed a humanitarian necessity, while exports were almost completely prohibited. At the same time, the number of exit permits issued to Gazans was sharply reduced. As their economy suffocated and living standards plunged, the people of Gaza, hemmed in from the land, air and sea, were unable even to flee. In effect, Gaza was transformed – in the words of former UK Prime Minister David Cameron – into a “prison camp“.

As for the inmates of this prison camp, Gaza is one of the most densely populated areas on the planet, with approximately 2 million people crammed into a narrow strip along the Mediterranean coast. More than 70 percent of Gaza’s population are refugees – people who, in 1948, were forcibly evicted from their homes, along with their descendants. This Tuesday, the 15th May, marks the 70th anniversary of their existential loss and ongoing torment. More than half of Gaza’s population are children under the age of 18. These human realities must be confronted honestly, rather than being disguised behind comforting abstractions. Whatever miseries Israel and its accomplices are visiting upon the people of Gaza, they are visiting primarily upon children.

In 2015, the poverty rate in Gaza hit 39 percent, despite 80 percent of the population receiving humanitarian assistance, while unemployment had reached 43 percent – probably the world’s highest. Youth unemployment, at a staggering 60 percent, is the highest in the region. In 2008-9 and 2014, large-scale military assaults by Israel left more than 2,500 people dead – overwhelmingly civilians, including 900 children – and some 24,000 homes destroyed. More fundamentally, the very capacity of the territory to support large-scale human inhabitation has been eroded. Ninety-six percent of the tap water in Gaza is now unfit for human consumption, and Gaza’s only freshwater aquifer is on the threshold of irreversible contamination. The United Nations warned in 2015 that Gaza might be rendered physically “unliveable” by 2020. The head of Israel’s military intelligence concurred with this assessment, while a July 2017 UN update found that projection to be overly optimistic.

Over the past seven weeks, the people of Gaza have mobilised in their tens of thousands to protest the fate to which humanity has, knowingly and in full view, consigned them. As the UN assessments make clear, Palestinians in Gaza are struggling not just for their rights, but to pre-empt their collective expiration. The Great Return March, as it is known, has been overwhelmingly nonviolent, comprising peaceful marches, gatherings and sit-ins. In the face of extreme provocations from Israel, not one rocket has been fired into Israel by Hamas or other Palestinian factions; indeed, notwithstanding increasingly desperate attempts by the Israeli government and its propagandists to depict the protests as a military threat, Israel has suffered not a single casualty. 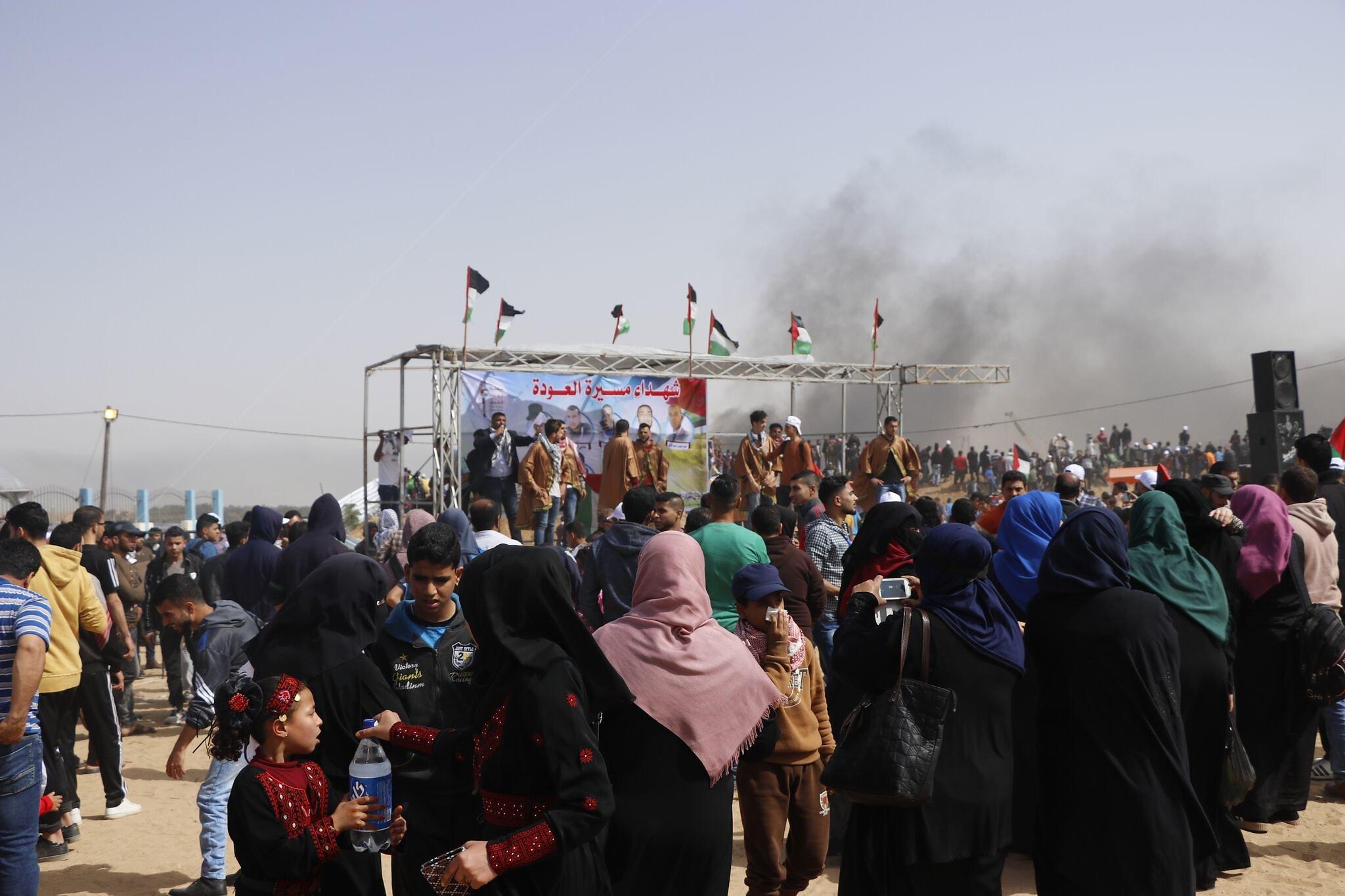 East of the al-Bureij refugee camp, the centre of the Gaza Strip. Photo by Khaled al-‘Azayzeh, on the 13th of April, 2018.

It cannot be said that Israel has responded in kind. In the course of what Amnesty International describes as a “murderous assault” against “demonstrators who pose no imminent threat”, Israeli forces had, as of the 10th of May, killed 40 Palestinians, including five children, and injured 6,800, including some 2,000 from live ammunition. In most of the fatality cases examined by Amnesty, victims had been shot in the upper body, including the head and chest, while some had been targeted from behind. On Monday, at the time of writing, a further 38 (and rising) Palestinians have been killed and 900 injured – 450 of them by live bullets – while protesting the move of the US embassy to Jerusalem. The demonstrators’ continued commitment to nonviolence in the midst of this onslaught represents a truly humbling display of courage and collective resolve.

Israel’s killing spree was neither accidental nor the result of individual initiative on the part of Israeli soldiers. When, as the Israeli human rights organisation B’Tselem found, “soldiers – including snipers – fired for hours on end at protesters“, they were faithfully implementing official policy. On the eve of the first demonstration, the Israeli military’s chief of staff announced that 100 snipers would be deployed along the border. “The orders are to use a lot of force,” he warned. Israel’s Defence Minister declared that “anyone who approaches the fence is putting his life in jeopardy” and elsewhere proclaimed that “there are no innocents in Gaza“. “Israeli soldiers were not merely using excessive force,” Human Rights Watch concluded, “but were apparently acting on orders that all but ensured a bloody military response to the Palestinian demonstrations.”

Reciting from the standard authoritarian PR manual, Israel has justified its lethal policy in Gaza on the grounds of self-defence. But under international law, Israel has no right to deploy violence in order to maintain an illegal occupation or a criminal siege. International human rights organisations have unanimously condemned the siege of Gaza as a “collective punishment” (International Committee of the Red Cross) imposed “in flagrant violation of international law” (Amnesty International). A UN Human Rights Council inquiry, authored by a New York state judge, called for the Gaza blockade to be lifted “immediately and unconditionally“, a demand that was in April of 2018 reiterated by the overwhelming majority of the European parliament.

Concrete policy alternatives in line with international law are available. At the narrowest level, the alternative to shooting children was suggested by the UN’s Special Coordinator for the Middle East Peace Process: “Stop shooting at children“. More broadly, Hamas has for years communicated to Israel its desire for a long-term, reciprocal ceasefire that provides an end to the illegal siege. “These demands and conditions have never been discussed,” an Israeli military correspondent reports, “as Israel refuses to talk to Hamas.” More generally still, Israel might end its consistent repudiation of the international consensus of a two-state solution and thereby make possible a peaceful resolution of the conflict. So long as it refuses to take these steps, Israel cannot characterise its violence in Gaza, or indeed in the West Bank, as defensive in character. Rather, the carnage in Gaza is being perpetrated for the sake of maintaining an illegal regime.

The Great Return March is scheduled to culminate in a mass jailbreak on Nakba Day, this Tuesday the 15th of May. As many as 100,000 people will gather and march unarmed upon the perimeter fence. A large number might attempt to break through, so that they might, if only for a moment, and even at the expense of their lives, breathe again. The Israeli military is preparing to deploy 11 battalions along the fence. If the events of previous Fridays are repeated, thousands more unarmed demonstrators will be shot, injured and killed. If international attention is directed elsewhere – distracted by the opening of the US Embassy in Jerusalem, for example – Gaza may be witness to a bloodbath.

Palestinians are often lectured from abroad on the merits of Gandhi. The current effort in Gaza will inevitably be viewed as a test case of the efficacy of a nonviolent approach; its success or failure will help determine the character of future efforts to bring the occupation to an end. But as a Guardian headline succinctly put it, “Palestinian non-violence requires global non-silence“. The people of Gaza are depending on us to make a nonviolent strategy viable in this, their hour of need. If the demonstrations in Gaza are met with mass displays of solidarity abroad, Israel might be induced to change its approach toward Gaza and a brighter future for the region may yet be within reach. Precisely how much pressure is required in order to force Israel to budge is difficult to predict. One thing, however, is certain: as Gazans attempt to break free of their prison camp, their only protection, their only armour, their only defence against the wall of Israeli snipers, is us.

The Palestine Solidarity Campaign has called an Emergency Demonstration in solidarity with the people of Gaza tomorrow, 15 May, at 5.30PM outside Downing Street.
—-

Muhammad Shehada is a writer and civil society activist from the Gaza Strip. He is a student of Development Studies at Lund University, Sweden, and was a Field Researcher and Public Relations Officer for the Gaza office of the Euro-Med Monitor for Human Rights.

Jamie Stern-Weiner is a dual British-Israeli national and the editor of Moment of Truth: Tackling Israel-Palestine’s Toughest Questions (OR Books, 2018).