Another victory for The Revolution

Some in Hamas fear the movement is being swept up in the same Egyptian military campaign that earlier this month toppled the country’s democratically elected Islamist president, Mohammed Morsi — like the Gaza rulers part of the region’s Muslim Brotherhood.

Egypt’s military has said the Gaza restrictions are part of its security crackdown in the Sinai Peninsula and has not suggested it is trying to weaken the Hamas government or bring it down in the process.

Past predications that Gazans fed up with the daily hardships of life under blockade will rise up against Hamas have not materialized.

However, the new Gaza border restrictions are tougher than any enforced by Morsi’s pro-Western predecessor, Hosni Mubarak, a foe of Hamas and the Muslim Brotherhood, according to Gaza residents and Hamas officials.

And an ongoing border closure is bound to further weaken Hamas’ popularity in Gaza, as the economy takes a new hit and Gazans are once again unable to travel.

“It’s getting worse every day,” Gaza City taxi driver Khaled Jaradeh said of the shortage of cheap Egyptian fuel caused by the closure. Jaradeh was waiting in a slow-moving line outside a gas station, with about 30 cars in front of him. 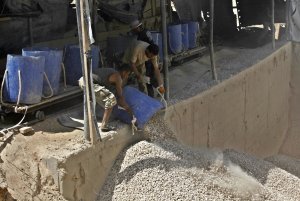 “Even when Mubarak was president, we used to get fuel through the tunnels,” Jaradeh said.

At the time of Morsi’s ouster, some officials in Palestinian President Mahmoud Abbas’ Fatah movement, Hamas’ main rival, privately expressed hope that the Hamas government would be next.

Hamas leaders have been careful not to criticize Egypt’s border clampdown in public, for fear of being accused of meddling in Egypt’s internal affairs. However, Gaza’s top Hamas official, Prime Minister Ismail Haniyeh, has complained that Egyptian media reports “about Hamas interference in the Egyptian affairs in support of President Morsi are not true.”

Some Egyptian media outlets have described Hamas as a troublemaker aiding Muslim militants in Egypt’s lawless Sinai, next to Gaza. Morsi is believed to have held back on security clampdowns for fear of angering more radical supporters.

Speaking privately, a senior Hamas official who frequently deals with the Egyptian authorities stopped short of saying Egypt’s military is intentionally trying to weaken Hamas rule in Gaza through the new restrictions. However, he said he views the Gaza clampdown as part of an attempt by the Egyptian army to justify its continued campaign against the Muslim Brotherhood in Egypt.

Authorities in Egypt moved quickly against the Brotherhood after Morsi’s July 3 ouster. They arrested several of the group’s leaders, and have kept Morsi incommunicado at an undisclosed location. Sinai militants have taken advantage of the turmoil and launched daily attacks against Egyptian security forces, killing more than a dozen soldiers and policemen this month alone.

The clampdown and the Sinai violence are only intensifying. 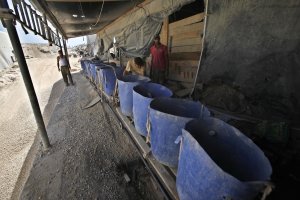 On Wednesday, Egypt’s military chief called on his countrymen to hold mass demonstrations later this week to voice their support for the army. And in four new Sinai attacks, suspected militants killed two soldiers and wounded three others.

Gaza has endured varying degrees of Israeli and Egyptian border closures since 2006, when the Islamic militant Hamas first came to power in Palestinian parliament elections. The blockade was tightened a year later, after Hamas overran Gaza and assumed sole control, defeating forces loyal to Abbas, whose authority is now confined to the West Bank.

After Morsi was elected Egypt’s president last year, he eased some of the border restrictions, though he did not open Gaza’s only gate to the world as wide as Hamas had hoped.

Still, during Morsi’s yearlong rule, cheap fuel and building materials from Egypt flowed relatively freely via the Sinai through border smuggling tunnels into Gaza, bypassing Israeli restrictions on certain imports to the territory. Aboveground, most Gazans were able to cross into Egypt after years of strict travel restrictions.

All that changed when the Egyptian military deposed Morsi after millions took the streets in protest against the president and his Brotherhood backers.

Since his ouster, only those with foreign passports and medical patients have been allowed to leave Gaza through the Rafah crossing, reducing the number of daily passengers from about 1,000 to 150. Gaza border official Maher Abu Sabha said there is a growing backlog, with about 10,000 passengers having signed up so far in July to leave Gaza and only a fraction actually getting out.

Egypt’s security forces have also clamped down on the tunnels, which along with consumer goods also bring weapons to Hamas and allow militants to move between Gaza and the Sinai. Three times this month, an Egyptian military helicopter has flown over southern Gaza, a rare event meant as a warning to Hamas to prevent the movement of militants. 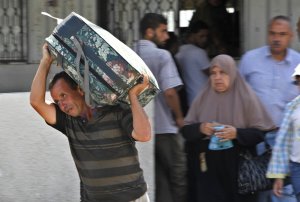 A Palestinian man carries a luggage to the bus at the border between the Gaza Strip and Egypt, in Ra …

An Egyptian intelligence official who often meets with Israeli counterparts told The Associated Press that several weeks before his ouster, Morsi ordered the army to stop storming homes on the Gaza border suspected of operating tunnels.

The order was made shortly after Morsi held a round table with tribal leaders from northern Sinai and security officers at the presidential palace, according to the official. The official, who spoke anonymously because he was not authorized to release the information to reporters, said military leaders were unhappy with the decision, saying Hamas used the smuggling routes to buy and sell weapons.

Robert Serry, the United Nations’ Mideast envoy, told the Security Council on Tuesday that Egypt has taken “robust measures” against the tunnels and that he believes 80 percent no longer function.

A tunnel smuggler said little merchandise gets through. “We are under enormous pressure, with strict security conditions,” he said on condition of anonymity because of his illicit business. “Only few tunnels are still working, and we can’t meet the demand of the market.”

Samir Fares, 64, who lives on the Egyptian side of the Gaza border, confirmed that the Egyptian military has destroyed many tunnels and only a few are still operating. He said the smuggling of building materials has virtually stopped.

For Gaza’s vulnerable economy, hit by years of closures, the sharp drop in cheap fuel and cement from Egypt is most damaging. Gaza Deputy Economics Minister Hatem Awaida said the economy has lost about $235 million as a result of the new closures. This likely includes a direct loss to the Hamas treasury — millions of dollars in taxes normally imposed on tunnel goods.

Fuel imported from Israel is still available but is twice as expensive and finds few takers. When Egyptian fuel on occasion still reaches Gaza, motorists line up at gas stations selling the smuggled shipment.

Mohammed Masoud, manager of a taxi station in Gaza City, said only 10 of his 20 cars are working at any given time. He said he can’t buy the expensive Israeli fuel because that would require him to raise prices, a move banned by the government. “When our customers call for a taxi, we ask them to expect a delay because of the ongoing fuel crisis,” he said.

In Egypt, newspapers — many known for their anti-Morsi stance — are full of talk about Hamas. They repeatedly carry poorly sourced reports of Hamas’ alleged involvement in Egypt’s affairs.

Egypt’s state-run Al-Ahram newspaper raised eyebrows with a front-page article this week that claimed Morsi would be detained on a number of charges, including phoning Hamas leaders days before his ouster to alert them to prepare attacks in northern Sinai against the military and police. Egypt’s top prosecutor dismissed the article as unfounded, and the paper’s editor-in-chief was questioned by prosecutors.

The steady campaign against Palestinians by some of Egypt’s state-owned and liberal media intensified after authorities said Palestinians, along with Syrians, were detained in violent pro-Morsi protests in recent weeks. No further details were given.

TV talk shows have also fueled the anti-Palestinian rhetoric. A guest on one claimed that Morsi is of Palestinian origin, while another said it would soon provide proof that Hamas was behind a Sinai attack that killed 16 Egyptian soldiers last year.

It’s not clear how long the Egyptian clampdown on Gaza will continue, though in Egypt’s current climate it appears unlikely the restrictions will be eased anytime soon.